From Government of Saskatchewan:  http://www.saskatchewan.ca/government/news-and-media/2017/january/19/dont-feed-the-wildlife

Best Intentions May Cause More Harm Than Good

Many parts of Saskatchewan have already seen nasty weather this winter, and it’s expected to return. Extreme cold, high wind chill values and snow storms make this season challenging for Saskatchewan residents. Severe winters often cause people to be concerned about the welfare of the province’s wildlife, including the white-tailed deer population.

The Ministry of Environment has received calls recently from individuals wanting to feed deer in areas of the province such as the southeast. While these concerns are understandable, these well-intended actions can be detrimental to deer populations. 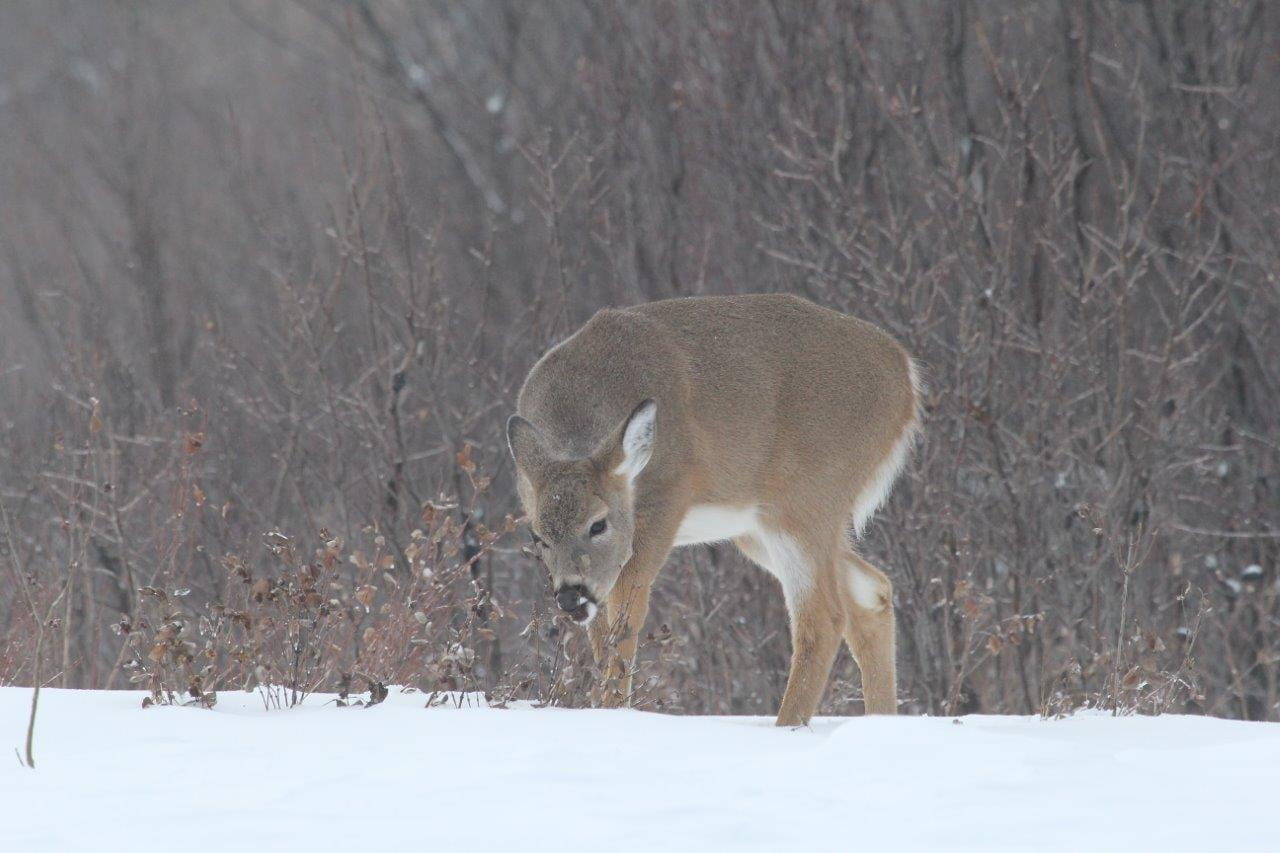 Biological adaptations, such as a thick winter coat, fat reserves, a reduced metabolic rate and sedentary behaviour, help deer survive severe winters. Even with all the food they want, deer will still rely on their fat reserves and lose weight over winter. Although winter-related starvation can occur, trying to save them through supplemental feeding can end up causing them more harm than good.

Deer are ruminants and have a four-part stomach. They rely on microbes to help digest the woody vegetation that makes up much of their winter diet. When deer eat food such as hay, which is not part of their normal winter diet, they cannot digest it and may end up starving to death, even with a full stomach.

Carbohydrate-rich food sources, such as grains provided as emergency dietary supplements, can also be fatal.

Supplemental winter feeding can also result in other negative consequences such as congregating animals, drawing animals in from long distances and away from good winter cover, increased predation and disease concerns.

Research has shown that deer in relatively good condition can fast for several weeks without suffering any harmful effects.

Deer also migrate to wintering areas with thick overhead cover and natural winter food sources. One way Saskatchewan residents can support deer populations is to ensure that larger blocks of tree cover, such as aspen bluffs, remain intact. These areas provide the cover and sufficient food for deer to survive the winter.

For more information, contact your local Ministry of Environment field office at www.saskatchewan.ca/residents/environment-public-health-and-safety/find-your-nearest-environment-office.

Change Location
To find awesome listings near you!